If people giving anaesthetics are still using a bunch of different techniques, it’s fair to assume that all those options have their own pros and cons. You could argue that’s true for most of anaesthesia but this post is going to look at one situation and one option: airway endoscopy and spontaneous breathing. It’s by Andrew Weatherall

Sharing can be hard, even when the situation demands it. Working with an ENT surgeon who wants to look down the airway is a fairly good example of that. Sometimes that will be because they really want to have a peek for diagnostic reasons or sometimes it’s to go and retrieve things that a patient has stored in a bronchus somewhere. Those diagnostic ones are tough enough, and that’s where the basic discussion should kick off (we’ll come back to foreign bodies another time).

These cases are challenging for a number of reasons. It’s also an area where everyone seems to have a different kit of tricks. It’s a classic example of there being more than one way to skin a cat. (Although that phrase raises a bunch of questions. Like why are people skinning cats in the first place? And how many different ways have they tried anyway? And  aren’t they all likely to be equally messy?)

So this post isn’t going to cover all of that multitude of options for anaesthesia for airway work. There might be other times to talk about muscle relaxant techniques or jet ventilation. This one is going to be about spontaneous ventilation and it’s a pretty simple collection of tips I’ve been given along the way that have made things easier.

Obviously it’s vital to have a good understanding of why the patient needs their airway checked. Is there a concern about things pressing on the airway or the airway itself? What level do the surgeons think there might be an issue? What are the patients symptoms and signs both at rest and when they’re asking any extra of their respiratory system? Are they requiring any positive pressure management normally? All these things may impact on the initial induction and management of the airway, the maintenance phase and the target you seek to hit at the end. There’s every chance the airway won’t be exactly the same at the end of the case. Preop assessment really matters.

You can’t share anything without a bit of communication. It’s important to know what the surgeon is aiming to do, what technique you all agree on (we’re assuming here it’s a spontaneously breathing technique), what the back up options may be (would you just wake up if things become gnarly or would you switch to a controlled ventilation technique as an example) and what limits you might set before the surgeon has to stop manipulating the airway and let you get back on top of things again.

It’s important that all this chat should happen with all the staff who will be in the theatre. You might feel like you’re sharing the airway with the surgeon but there are a lot of other people in the room who need to know exactly what you’re planning. 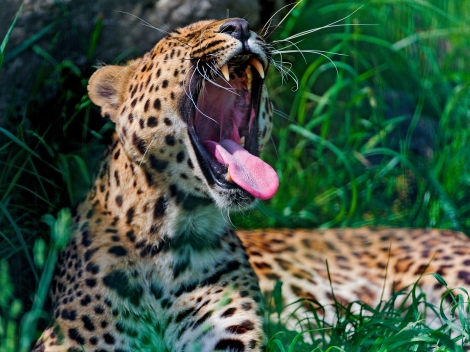 Here is a photo of a leopard yawning as a visual rest and also because it is a tiny bit linked to airways. And because I wouldn’t have a photo of furry things being skinned.

As I mentioned above, there are a number of ways to deliver on the anaesthetic goals of keeping the patient doing the breathing but also in that blissful state where they’ll huff away happily and not react on the bronchoscope or at laryngoscopy.

Volatile anaesthesia with sevoflurane remains very popular, though it sometimes seems easier to find descriptions of intravenous techniques. I have it on good authority from clever people senior to myself that the greatest ever combination was halothane and methoxyflurane, back in the days that you could put vaporisers in series. (That’s right, in Australia we are so blessed with clear air and sunlight our anaesthetists keep working to the sort of age that lets them pass on the wisdom of the ancients to youngsters.) The reason they rate it so highly was it apparently produced a reliable and consistent depth of anaesthesia with a respiratory pattern you could set an atomic clock to.

I know anaesthetists who still prefer the volatile anaesthesia option because if the patient hits a deeper plane, any suppression of respiration will limit the chance of going too far. Using sevoflurane there is also probably an advantage in time to return of normal tone and function if the surgeons want to look at cord function as the patient wakes up. It’s worth noting that many of the descriptions of IV techniques point out that they often kick off with a mask in hand until they secure IV access. Volatiles work.

The perceived advantage of intravenous techniques is that where there is any interruption to respiration or delivery of anaesthetic vapours, you will have continuous maintenance of the plane of anaesthesia. It also stops you venting those gases to the broader theatre environment. After all, it can be awkward if the surgeon falls asleep and slumps into the airway themselves.

At the end of this post you’ll find links to a bunch of references that cover a range of options with various combinations of dexmedetomidine, propofol and remifentanil. If you look around you can find dexmedetomidine listed in bolus doses anywhere between 1 mcg/kg to 5 mcg/kg and infusions from 0.5 mcg/kg/hr (more for adults) to 5 mcg/kg/hr. You’ll see propofol rates hovering around 200 mcg/kg/hr and remifentanil starting at 0.05 mcg/kg/min and inching up after minutes left alone. Again, there are lots of ways to reach the same goal.

Something all the IV techniques seem to have in common is a technique designed to reach an adequate plane of anaesthesia, with a bolus option to provide a further drop in depth if the patient displays any evidence of becoming reactive (propofol 0.5 mg/kg seems to be popular).

The descriptions of various IV cocktails all bear one striking similarity. They describe induction times of more than 10 minutes. The spontaneous ventilation technique is critically dependent on adequate depth of anaesthesia and diving while still breathing requires time. Hand the airway over only when you’re sure.

I should probably have ranked that as number 1 because this is actually super important. (It’s at 5 because I started on a path through this forest assuming I’d note things along the way as if I was actually setting up a case and this is where we ended up so just work with me.)

Some of  the papers mentioned below talk about the importance of topicalising the cords and the trachea. Nope. Well yes. But also nope.

The surgeons are going to be using a laryngoscope initially and then placing it on suspension. You’d probably be pretty familiar with the idea that laryngoscopy is a bit stimulating and that big bit of hardware is going to stay there. So don’t just spray local anaesthetic on the cords and trachea. Topicalise the epiglottis, the vallecula and that whole area where a big laryngoscopy blade might fumble around before they hit the sweet spot. Then topicalise the cords and trachea.

To keep assessing the depth of anaesthesia you won’t always have your usual options (though some would no doubt advocate using BIS or entropy as a way of monitoring depth).

What about touch? The pattern of respiration gives immediate feedback as to what’s going on. Sure a lot of monitors can offer you respiratory rate and depth via impedance ECG set-ups but the hand of the anaesthetist is actually a pretty good option.

So whenever I’m setting up for airway endoscopy like this once I hook up the ongoing airway option to the surgeon’s laryngoscope I stay right next to the patient and place one hand on the chest. That hand is constantly assessing depth, rate and pattern of respiration. This also reminds you to make absolutely certain that none of the tables placed over the patient are getting too close.

Is that the whole answer to how to do these cases? Of course not. Remember there’s all those options for skinning cats. I’d bet that these general points pretty much help with whichever particular technique you choose though.

Assess the patient properly, make a plan, really think through your technique, don’t rush, topicalise well and keep close contact with the patient.

Actually most of those tips probably apply to most anaesthetics I guess.

Do you have other suggestions or things we could learn from? Please consider leaving a comment and sharing your brilliance. Alternatively, if there are burning questions not covered, drop a question in the same spot.

I looked through all of these in thinking about this post. It’s definitely not all the literature but it’s a starting point. That way you can go to some source literature to think about it in way more depth than can be covered here.

The photo here is in the Creative Commons part of flickr and was posted just like this by Tambako the Jaguar.

Did you get this far? Then maybe you’d like a reward. Go and check out this Rube Goldberg set-up with marbles and magnets. It’s brilliant.