It’s been a while since a tips and tricks post. This time around we thought we’d collect some pearls on a topic plenty of learners find a bit challenging – getting that nasal tube to go where you’d like. Collected below are thoughts from Dr Neil Street (NS), Dr Gail Wong (GW), Dr Justin Skowno (JS) and Dr Andrew Weatherall (AW), who all work together at The Children’s Hospital at Westmead. Most of these tips are more about nasal intubation in the littler ones vs nasal intubation for older people having things like oral surgery. We’ll try to make it clear when we’re talking about the latter.

“You only realise you need vasoconstrictor when the bleeding starts.” (JS)

“Nasal vasoconstrictor and plenty of lubrication are a good starting place. I don’t routinely warm my nasal tubes to be honest, but won’t object if the nurses do.” (GW) [Probably particular a note for larger people ETTs]

“I usually put the tube orally first. It gives you a chance to check the size is right while also prewarming the tube. Warming the tube helps stop you causing damage.” (NS)

Choosing the Right Tube and Getting it Through the Nose

“I prefer to choose a slightly smaller tube with a cuff if anything so it’s easier to get through the nose. If you’re having trouble passing the ETT through the nasal passages try a smaller ETT or use a bougie as an introducer first just to encourage it as far as the nasopharynx.” (GW)

“If the tube doesn’t go through the nose easily, remove it and place a bougie through first and the ETT will follow. Once through the nose always check the end of the tube for snot or even adenoidal tissue. It needs to be removed before you intubate and a quick puff on the tube with the circuit should do it.” (NS)

“If the patient is dodgy (for example doesn’t tolerate apnoea much) or if I’m working with a junior trainee and the patient is a neonate I’d orally intubate first. Otherwise I just go for a primary nasal intubation.” (GW)

“I don’t orally intubate first unless the child has a known difficult intubation or terrible oxygenation. Why routinise 2 intubations?” (JS)

“For the little kids I generally orally intubate first because once in a blue moon it takes just that little bit longer to secure the airway or you have an unanticipated slightly more difficult laryngoscopy and you can end up with a patient desaturating when there was never a need for that. If there’s any challenge with an oral intubation I can always leave the oral tube in while carefully lining up everything and doing a really controlled exchange of oral for nasal tube under direct vision. That sort of exchange allows much easier communication with the team and makes the whole thing very low stress. I pretty much always advise trainees to just intubate orally first, understand the airway better and plan from there. As a standard approach it pretty much covers you for that occasional challenge in terms of keeping it smooth, rather than having to vary your practice after you’ve found an intubation vexatious.” (AW) 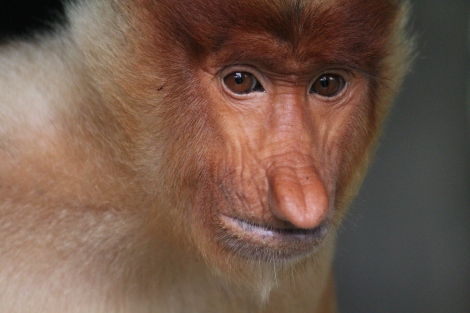 It’s just a nose. Try not to look.

“If you don’t get the tube placed immediately or the patient desats, don’t pull it out! Pull it back 1-2cm, close the mouth with your hand under the chin, close the nostrils with your fingers of the same hand and ventilate. A nasopharyngeal tube is a great airway. It is always tragic when the trauma is repeated by reinsertion when it is unnecessary.” (NS)

“If it’s taken a while to insert the tube through the nose and there is a need to ventilate the patient before laryngoscopy – do not remove the perfectly placed nasopharyngeal airway (your ETT) to bag-mask ventilate. Just close the opposite nostril and mouth, connect to your circuit and ventilate as usual.” (GW)

“Remember you can ventilate a child with the ETT above the cords and this saves having to completely come out to deoxygenate. (Thanks Neil.)” (NS)

“When Neil pointed out the “don’t pull it out!” tip to me as a trainee it was so obvious and so very, very useful.” (AW)

“The most important aspect of nasal intubation is to understand that the curvature of the tube and its course from nasopharynx to tracheal inlet causes it to be poorly aligned with the trachea (it points upwards at the anterior tracheal wall). You can introduce it through the cords, but the wretched thing won’t advance as it hits the anterior trachea. Tricks to getting it in – dexterous use of MacGills, get someone to lift the head whilst you advance tube and if really struggling use an introducer (gently).”

“Because of the alignment of the anterior larynx and the nasal route the ETT often sticks in the anterior commissure of the cords, I pick the tube up with the Magills and bend it so that it is aligned directly down the trachea. So instead of just pushing you need to bend and push. Alternative techniques include; rotating the tube as you advance (particularly in the older types as it can be a bit traumatic); lifting the head as it aligns the pharynx with the trachea; push the tube a little posteriorly as you’re getting to the cords so you straighten the alignment.” (NS)

“I usually make one attempt to pass the ETT without Magill’s forceps by rotating while advancing but have a low threshold for picking up the Magill’s.” (GW)

“There’s two things I routinely try. One is to actually let the laryngeal structures fall posteriorly a bit (by easing up on the laryngoscope) as it helps with alignment. It does mean your view is lessened a little. The other thing that helped me was making an effort to use the Magill’s to grab the ETT a bit back from the end. This allows you to tilt or bend the distal part of the tube to get it heading that little bit more in the line you want.” (AW)

“Remember that subglottic stenosis can present as a difficult nasal or oral intubation.” (JS)

“If you’ve done everything right and that tube won’t advance, it might be that you’ve just found pathology. Confirm you can get oxygenation/ventilation happening with the tube where you are (or solve that first), and stop and think.” (AW)

So there’s the collection. Is it everything? Almost definitely not. If there are ones that always do the job for you then throw them somewhere in a comment. It might be something about the nose that no one else knows.

That image of a female Proboscis monkey is from the Creative Commons area of flickr as posted by Bjorn Vahlberg and is unmodified.

We really would like those comments. These are just tips and tricks that work for a few people we know and there must be more out there.

And if you think there are good features of this post or other posts here you can actually follow along. Take a look and there’ll be a spot to drop your email so you’ll get notified when a new post goes up.

We’re always on the lookout for topic suggestions to so if there’s something that should be said, you could always nudge us to say it (remember that comments idea).